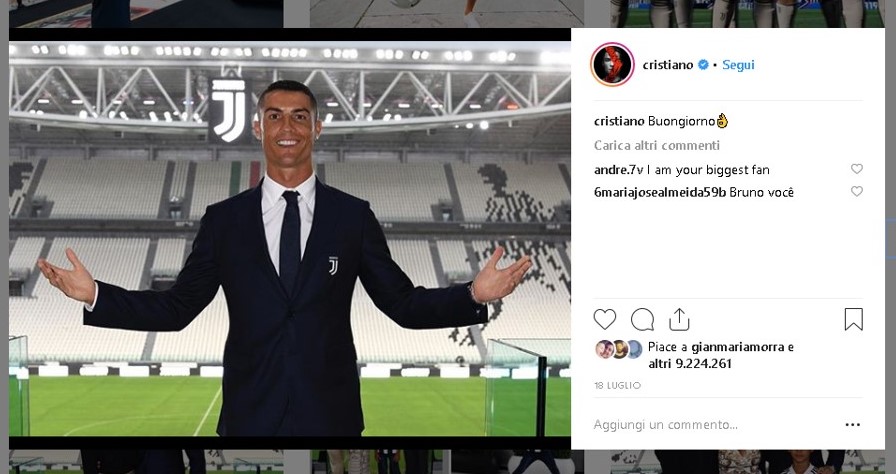 What is the true value of Cristiano Ronaldo deal?

The acquisition of CR7 is radical making change not only in the history of Juventus, but in Italian football. That goes far beyond the football results …

Cristiano Ronaldo to Juventus marked an epochal turning point due to the figures, the standing of CR7, and the historic moment of football.

Initially, with the first leaks of news on the negotiation, public opinion was bewildered and incredulous, confirming the psychological subjection of our league and a typically Italian provincial attitude also in football. When everyone understood that Cristiano Ronaldo and Jorge Mendes, his very powerful agent, really aimed to move to Italy, the clamor aroused is the sign of a watershed for Juventus and for Italian football. The operation has many implications.

A sporting implication, first of all, since Juventus, defeated in two of the last four Champions League finals, takes Ronaldo, who has won four of the last five!

A cost implication, since the costs related to the tag and engagement are out of any previously established parameter (Higuaín was paid € 97 million but earned a quarter of what the Portuguese earns). In the last 8 years, Juventus run a profitable sport management without madness (apart from Pipita).

An implication of sustainability, because Ronaldo goes for the 34 years, but he has found an effective way to make up for the slowing down of the age to such an extent as to seem immune. The training, the preparation and the nutrition are paying for the sacrifices which the Portuguese are making. The fact that Juventus has decided to focus on him with a four-year contract highlights a sharp interruption in the linearity of the market management model to date. The more the Juventus brand has grown, the greater the purchasing power of the club. With this regard, the Ronaldo deal represented an inevitable step.

An implication of risk, since Ronaldo was a real blitz: it costs a lot, he has never played in Italy and despite a strong performance, he has starting the descent phase of his parable sports in terms of age. However, he remains a stratospheric player, an extraordinary opportunity, a natural leader, another unusual thing for the management of the Juventus locker room.

Apart from the various issues related to the possible write-down of the card and the risk of sports results (Juventus has to win the Champions League!), the deal is a modernization of Italian football: Juventus has done both a sporting deal and a huge marketing deal with effects on the growth of the brand and the growth of merchandising. The drag effect which CR7 will be able to generate on the real numbers of Juventus is demonstrable by the digital numbers of the Portuguese compared to those of Juventus:

The comparison with Juventus becomes even more ruthless if we consider that it is estimated a value of $ 180 million in sales in 2018 generated by the web. We have to add the lifetime agreement with Nike, which drives the sales to $ 1 billion, against about € 500 million Juventus. A single athlete is worth more than a glorious and winning club such Juventus.

The CR7 deal echoes that of Diego Maradona and Naples: he arrived for about 17 million old lire, about € 9 million, basically to win. But football today lives a completely different dimension.

Ronaldo must win the Champions but the real value of the deal is in the numbers seen before: Juventus is launching its brand among the top clubs in the world. It is definitely approaching football as pure entertainment, where budgets are made with stadiums-malls, merchandising, and digital crossing mechanisms.