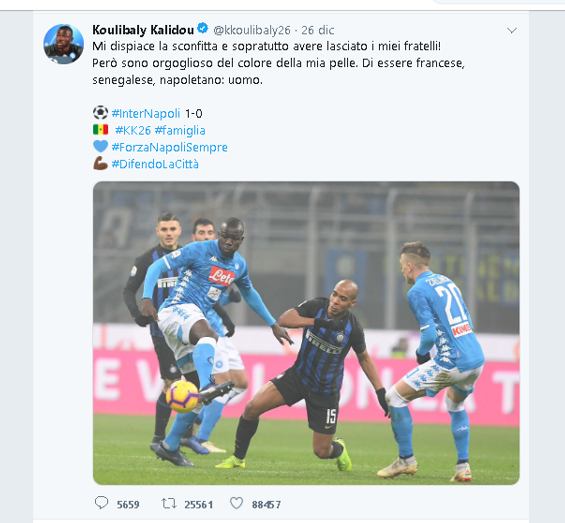 No hope for a better country when, despite living in a global and integrated world, there are still people who, instead of going to the stadium to have fun, insult a city or the color of the skin

Last December 26, the football match Inter-Napoli was also the match of the “buuu” and the racist chants addressed to Kalidou Koulibaly, the Senegalese defender who plays in Naples. The player was also expelled at the end of the match when, after a admonition and with nerves exploded after almost an hour and a half of insults, he applauded the referee who sent him out.

Everyone has intervened on the matter: from the solidarity messages of Mauro Icardi, the most representative player of Inter, to Cristiano Ronaldo, up to the highly appreciated apologies of the Mayor of Milan, Sala. Both the top institutional levels of world football, FIFPro (the international soccer association) and Uefa have jointly condemned racist offenses, and of course the Italian football authorities, who have sanctioned Inter with two games to play behind closed doors and with the partial closure of the stadium for a third home match. I do not know how many are the phenomena of idiocy that have sung these racist songs that, despite the announcements made by the speaker of the stadium, have not stopped. The sad thing is that you close a whole stadium, a place where you should go to have fun, maybe taking the children, to live one of the most popular forms of entertainment by Italians. I think that best of all it was Koulibaly to stigmatize the behavior of these fools who have transformed a moment of entertainment (because I remember that football is a sport to entertain) in a single, large racist choir. His tweet says: “I’m sorry for the defeat and above all leaving my brothers! But I’m proud of the color of my skin. To be French, Senegalese, Neapolitan: man! ”

Koulibaly says he is sorry to leave his brothers, to remind everyone that sport must contribute to build strong bonds of brotherhood, by linking and not dividing!

He says to be proud of the color of his skin. At sunrise of 2019, skin color is still an issue instead of thinking about how much amazing the integration of different cultures, ethnicities and backgrounds can be. Who steals, kills and rapes is a delinquent regardless of color and nationality, and has nothing to do with racism and immigration.

He says to be also proud to be French and Senegalese, because a real man proves such when he makes difficult choices avoiding shortcuts, as Koulibaly did when he decided to play with Senegal instead of France, even though he could win the World Cup.

Finally, he says he is proud to be Neapolitan, as all those choirs were not only against the color of the skin but also against a city where many still wait for Vesuvius to wash all with fire!

In a video sent the other day by Rainews 24, I watched a fan launching racist insults to a player during the match in London between Chelsea and Manchester City last December 8. He was not a hooligan but a distinguished 60-year-old manager who was immediately fired, permanently banned by Chelsea and now faces a heavy criminal conviction. We should need that kind of approach in Italy: do not close the stadiums but use all the technological tools to identify these ignorant and behave accordingly! If we want to do serious things without demagogy!