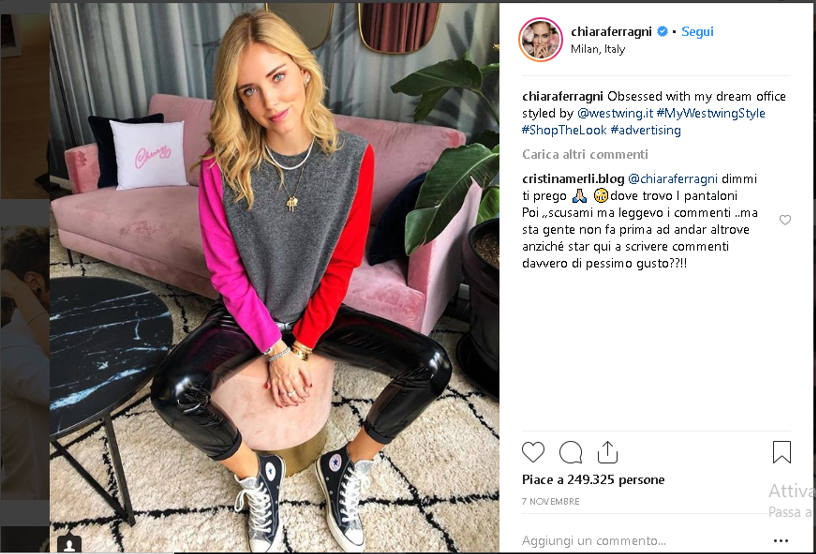 From #TheFerragnez for the wedding with Fedez to the Evian to the the party at Carrefour in Milan: the communicative and influential strength of Chiara Ferragni.

Our intelligence, sexual habits and much more can be related to the number of likes on Facebook. Artificial intelligence can know us much better than we know ourselves and Facebook, Instagram or Twitter are much more than simple communication platforms.

Human beings have a fundamental need for belonging and a desire for social status. Our brain treats information about us as a reward and this particular evaluation system is very careful when we have information related to us. #socialnetworks are able to catch this feeling as they bring relevant information, status and reputation.

Social networks have also drastically changed the way companies communicate and influence: without engaged communities, they would no longer be able to communicate or influence behavior.

#TheFerragnez teaches a lot about that.

#Fedez, the myth of young people, from radio hits to XFactor, has conquered the millennials with 6.6 million followers, only on Instagram.

The result is a perfect pop couple. For the big event, their marriage, they carefully studied the social media strategy: Facebook, which is increasingly a platform with an adult target and young people give up for the presence of their parents, heading to other platforms, gave the step to Instagram, which performed incredible numbers. Many brands supported the event: from Pomellato (Ferragni is an ambassador), to Trudi, Dior, Prada, Versace, and Alitalia, for the travel-trip of the guests. In the latter case, the economic return was crazy if you think that purchases behaviors choices depend on what users look at Instagram stories, and that a sponsored post by Chiara Ferragni is worth more than ten thousand euro.

Ferragnez was not a gossip but a phenomenon: 34 million total interactions in the period, of which 96%, equal to over 32 million, only on Instagram. The numbers are bigger than those ones on television and other traditional media. Twitter has produced over 150,000 posts and #TheFerragnez has been in the top trend from 31 August to 2 September.

After the wedding, the couple continued to feed a big echo around them both with the party for Fedez, at the Carrefour in Milan, and with the personalization of Evian water. Regarding the party (and the annexed launch of fruit and vegetables), this is a regrettable incident, because of the million poor people in Italy. In effect, they have tried to apologize. However, even this episode confirms how powerful the web is, for better or for worse. Regarding the Evian water branded Ferragni and sold at about 8 euro, almost everybody talked about that, throwing up against the blogger the most incredible slanders, even leading to a formal question at the Italian Parliament! Chiara Ferragni and Evian simply did a marketing agreement without either feeding the issue of water scarcity in the world or of plastics waste (Evian should have sold those bottles with or without the brand). I found the bigotry and the false respectability more scandalous than 8 euro. It is always the market to decide.

This is an example that represents the radical change of all the traditional communication channels, and we have to deal with this phenomenon. Chiara Ferragni is the (living) offline proof of the huge power of online (web).