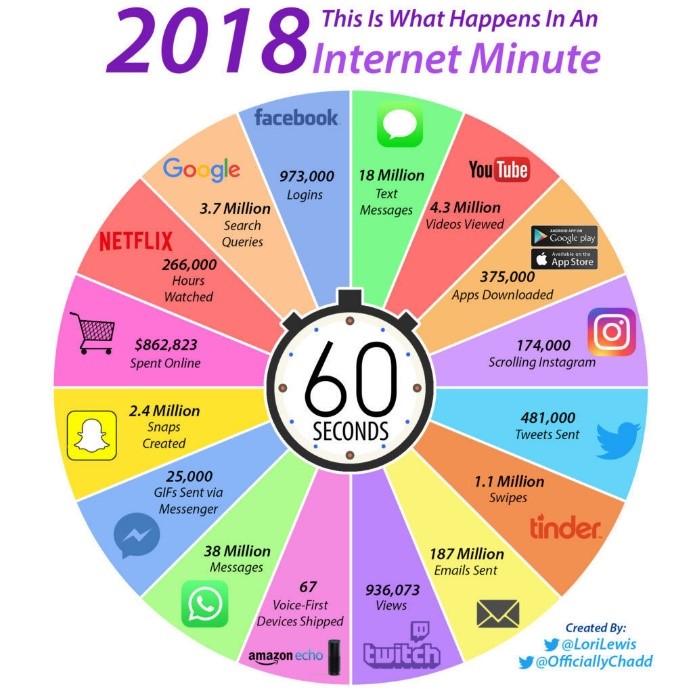 What happens in an internet minute in 2018!

Internet remains the absolute protagonist of the year, with impressive and mind-blogging numbers!

In your everyday life, a minute might not seem like much. But a minute of internet goes much further than you ever could have imagined.

Today’s infographic is from Lori Lewis and Chadd Callahan of Cumulus Media, and it shows the activity taking place on various platforms such as Facebook or Google in each 60 second span. It really helps put an internet minute in perspective.

The numbers for these services are so enormous that they can only be shown using the 60 second time scale. Our brains can’t even process these massive quantities in any useful capacity. Here are just a few key numbers, for fun:

On an annualized basis, we should talk about something close to 100 trillion emails!

The biggest and most noticeable jump in comparison to 2017 comes in Netflix hours watched: from 70,000 hours to 266,000 hours! While we have not seen the exact methodology of these calculations, we do know that in December it was announced by Netflix that users were watching approximately 140 million hours per day. I am sure that Internet will be the protagonist in 2019, as well!

The true home of e-commerce is China!

E-commerce or shop? The magic of Amazon even in toys

Italian companies do not use data from our shopping experiences